The Songwriter Sessions upstairs at The Craven Arms

A fabulous November evening spent at the Craven Arms yesterday in the warm company of Gary O'Dea and special guest Jess Silk.

The Craven Arms is an excellent little venue at the back of The Mailbox in Birmingham city centre and the upstairs room, which is at the end of a rabbit warren of corridors at the side of the front bar, was well worth finding! One member of the bar staff told me "just follow the music" and sure enough I was in time for Gary's warm-up set as he performed an acoustic version of 'White Man in Hammersmith Palais.

Tipton troubador Gary O'Dea is a stalwart of the roots music scene of the West Midlands and his post-Covid Songwriter Sessions are a revival of those good times before we all became too nervous to sit in the same room as each other listening to people playing instruments without a Zoom camera. Yes, it was vaguely interesting to see eveyone's living rooms for 18 months, but you can't beat carrying your pint through a dimly lit Victorian pub on the quest for the warm glow of fellow human beings and the live strum of a guitar through an amp... not an app.

Gary now has a momentum going at the Craven Arms, as the word goes round that there is live music to be had which at the moment costs just £5 to get in. The venue is very central whether you go by car (pay attention to the clean air zone rules), train or, as I did, the bus with a brisk stroll along the canal thrown in for added authenticity and 4pm on a Sunday also seems a good time. 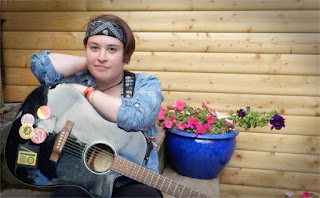 Special guest was Jess Silk, hard srumming guitarist, singer with a voice of gravely passion and uncompromising songwriter from the Black Country. Jess makes no apology for her seriously raging lyrics, but at the same time melodic and even anthemic songs. The only sticker missing on her guitar case is 'this weapon kills fascists' and she is more deserving than most to display it. Jess's own self-comparison being Frank Turner but echoes of Billy Bragg too.

In an era when the gulf between rich and poor just multiplies weekly, when the government is as full of sleaze as ever, when the leaders of the world can't even be arsed to get the Megabus home from the environment gig as a one-off gesture, when the populist tyrants seem to get voted in time after time and nation turns against flag waving nation, maybe its time overdue for some anger in the belly of social change and solidarity again and Jess Silk has the voice and songs to make it happen.

A strong arsenal of songs, a blazing vocal resounding with common sense. I once saw Jess Silk for a fiver in the upstairs room of The Craven Arms.