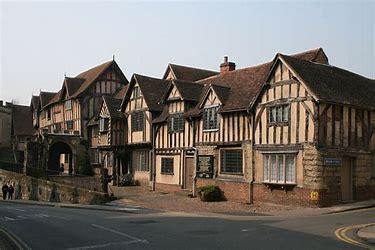 Members of Warwickshire Local History Society (WLHS) enjoyed a sunny afternoon and a successful outing recently as they took part in a Fire of Warwick History Walk.

On 5th September 1694 Warwick experienced a catastrophic fire that destroyed hundreds of houses. Members found out more on a walk around the town centre with Sue Rigby and her colleague Paula Fletcher. The fire started when sparks from a lighted faggot caught a thatched roof near Lord Leycester’s Hospital. A brisk wind blew for hours along the High Street, encouraging the fire to spread from building to building. After six hours the wind dropped and the fire subsided, but many citizens were now homeless, although there was no loss of life.

Stephen Wallsgrove explained the relief and reconstruction efforts, showing facsimiles of surveys, claims for compensation, and other documents held by the County Record Office. The response of the local elite seemed impressively swift. The very day after the fire, Lord Brooke of Warwick Castle and other wealthy people started a subscription fund to cover people’s losses. Commissioners were appointed to scrutinise the claims of inhabitants with a view to compensation. To reduce the risks of further fires, a local Act of Parliament established strict building regulations. Thatch and timbered construction were banned in favour of plain frontages in brick and stone. The process of rebuilding took years but enabled Warwick to establish wide straight streets and a co-ordinated classical style.

Although the society has been active with online meetings recently, this was the first face to face outing since the start of the pandemic and members welcomed the chance to meet in person again, with one member saying “After so long, it was revitalising to be able to meet, interact and learn with real people in the flesh. Not only a physical tonic with the walking, but also a mental and spiritual one.”

Forthcoming outings are open to members and will be largely open-air (with other COVID-related measures) starting with a trip to Napton-on-the-Hill on 17 July. Full details of events and how to become a member are available on the WLHS website, warwickshirehistory.org.uk