New exhibition shines a light on the history of Worcester

From 1950s shop fronts and forgotten landmarks, to communities that were migrated as the city developed, evocative images in the exhibition unlock memories of days gone by. The images were taken by staff of Worcester City Council, including health inspectors, archaeologists, conservation officers and planners to inform their day-to-day work, capturing building use, living conditions and heritage. They tell stories of lost industries, of hardship and poverty followed by regeneration and redevelopment, some of which still divides opinion today.

Other images capture a more domestic view, especially those images taken by Chief Public Health Inspector Tom Marsden. It was Marsden’s role to ensure that housing conformed to the 1957 Housing Act which called for houses to be fit for human habitation and led to around 3,500 properties in Worcester being condemned as unsanitary and unsafe. His incredible photographs capture the conditions that many families experienced after a half-century of neglect, economic depression and two world wars. Rising damp, rat-infested courtyards and cramped, airless spaces were just some of the scenes captured as he surveyed the city. What followed was the mass demolition of many areas, including the tenement houses of the Blockhouse, Tybridge Street, The Moors, and Dolday.

Visitors can see nostalgic images documenting almost a century of changes to the city of Worcester, original items from Worcester’s Social History Collection and follow a Worcester Life Stories trail around the Art Gallery & Museum which will test how well they know their faithful city. They can also share their stories to be preserved for future generation. 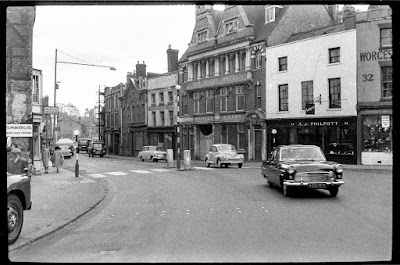 David Nash, Social History Curator with Museums Worcestershire, says: “This exhibition is a fascinating window into the past, inviting residents of the city we live in now to see how it has been shaped and changed over the past 70 years. Our cities are constantly evolving beneath our feet and it’s enthralling to see how past generations lived and to see how the streets we are so familiar with have altered through time.”

Anne Jenkins, Director Midlands and East, National Lottery Heritage Fund, says:  “We are delighted to support this project which, thanks to money raised by National Lottery players, will mean that more people will be able to get involved with, protect, and learn about the exciting heritage right on their doorstep.”

Worcester Life Stories exhibition is part of a collaborative project bringing local people together through shared stories of the City of Worcester. It is led by Worcester City Council and Herefordshire and Worcestershire Health and Care NHS Trust, with funding thanks to National Lottery players. The project brings together archived heritage, digital technology and community events to promote public health and wellbeing. Thanks to a wide range of partner organisations it has been made accessible to local people of all ages, including those living with dementia, their carers and people who are socially isolated.

The exhibition is free and runs from 12 June until mid-February and more information can be found here: www.museumsworcestershire.org.uk

Please note that social distancing measures will continue to be in place when the exhibition opens and we will be managing visitor numbers, reminding visitors to remain socially distant and to wear a face covering for a safe and happy visit.