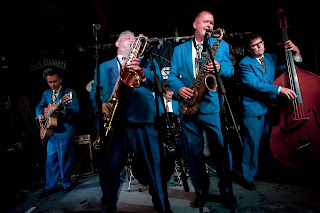 Brum’s finest, King Pleasure & The Biscuit Boys, will play a rare hometown date when they appear at Pizza Express on Brindleyplace, Broad Street on Saturday 14th December.
The Kaypees have been on the road for nigh on 32 years, playing over 6500 shows throughout the UK, every European country, The USA and the Middle East – travelling over a million miles in the process.
An established attraction playing festivals, clubs and theatres, King Pleasure & The Biscuit Boys have three times opened for blues giant BB King as well as Ray Charles and Cab Calloway.
BBC Radio 2’s Paul Jones said that they are “The hardest act to follow since the parting of The Red Sea” while The Guardian wrote “Behind the fun and rollicking good times lies an outfit skilled enough for the horns to come on with the bite and precision of the Basie Band”
Among their 11 eleven albums released on Big Bear Records is 1993’s Live At Ronnie Scotts Birmingham. The band were the star attraction at the much-missed Broad Street club, and will now be returning to Brum’s Westside for the closest thing the city has to “Ronnie’s” today, Pizza Express, Brindleyplace.
Tickets are £20, available from www.pizzaexpresslive.com or on 020 7439 4962, with the band tipped to repeat last year’s sold-out showing at the venue. 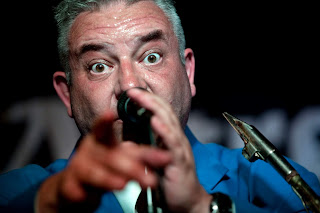