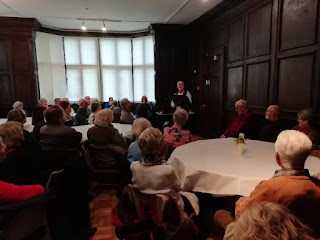 Christmas Songs Through the Ages Performed in Historic Surroundings
Warwickshire Local History Society (WLHS) attracted an audience of 45, including many new faces, to their Christmas event, Christmas Songs Through The Ages, at St John’s House, Warwick, on Saturday 7th December.
Dr Richard Churchley entertained the Society with a repertoire of songs that spanned several centuries, from the medieval Boars Head to Bing Crosby’s ‘White Christmas’.  Richard, an experienced local historian who specialises in the areas of Worcestershire, Warwickshire and North Gloucestershire, is well known to the Society from previous talks and once again proved a popular choice.  Guests enjoyed singing along to Christmas classics such as The Coventry Carol and Deck the Halls, as well as some lesser known songs, and finding out about the history behind them.
The event took place in the historic surroundings of St John’s House, Warwick, a seventeenth century house on a site that dates back to 1154, when the Hospital of St John the Baptist was founded by the Earl of Warwick. Guests enjoyed looking round the Victorian schoolroom and kitchen before enjoying a delicious afternoon tea provided by Napton Catering.
WLHS always welcomes non members to their talks and outings.  Their next talk will take place on Saturday 18th January 2020 at 2 pm (coffee from 1.30 pm) at St Michael’s Church Centre, Church Lane, Budbrooke, Warwick, CV35 8QL and will be about the Warwick Pageant & the 20th Century Pageant Movement’, by Ellie Reid, independent researcher.  There is no need to book and non-members can attend for just £3, refundable if they join the society on the day.
Dr Richard Churchley’s website is http://www.churchley.org.uk/music/index.html The ground floor of St John’s House is available to hire; contact Bronwen Williams: hcwcommercial@warwickshire.gov.uk or phone 01926 736420/736492
Contact Napton Catering for all your catering needs (https://www.naptonvillagestores.co.uk/napton-kitchen-to-you/).
For more information about WLHS and events please visit their website, www.warwickshirehistory.org.uk.  Facebook: @historysoc; Twitter: @Warwickshistsoc 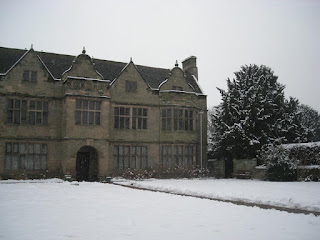