WHERE THE WILD COOKS GO 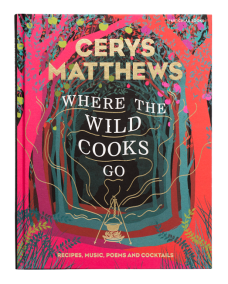 Where the Wild Cooks Go is a voyage of discovery through food, stories, poems, music and other curiosities.

‘A joyous treasure trove!’  - Michael Morpurgo
With a childhood spent foraging and learning to make hedgerow and nettle soup, followed by a life of touring as a musician around the world and delighting in the local delicacies discovered along the way, a love for food and cooking has always been at the heart of Cerys Matthews' experiences. Cerys’ cookbook debut is the long-awaited collection of her culinary learnings around the globe, celebrating the flavours and ingredients that accompanied the music, poetry, and local culture she relished during her travels, and the recipes she took home with her to recreate in her own London kitchen.
It's a go-to for anyone who wants to eat a little more sustainably, or cook for a group with different dietary requirements, with its variety of flexible recipes for vegans, vegetarians and meat eaters alike – plus a few killer cocktails.  Cerys nods to Morocco for thousand-hole pancakes with amlou, Spain for roasted artichokes, Ireland for death by chocolate in a glass, Mexico for pineapple with chilli, the American south for cornbread with jalapeño, Scotland for vegan haggis –  just a few of the recipes and places she celebrates in this book.
Stories, poems and folklore from each country, with a list of tracks to inspire while you cook and eat, make this a fuss free way to keep things interesting in the kitchen.
Cerys Matthews MBE programmes and hosts the BBC Radio 2 Blues Show and her Radio Academy Award-winning Sunday show on BBC 6 Music.  She was the founder member of the multi-million selling band Catatonia and author of the Sunday Times bestseller, Hook, Line and Singer.
Posted by Spaghetti Editor at Friday, December 13, 2019