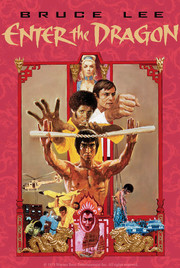 Stoke Cult Film Club - Enter the Dragon
Friday 17 January
On Friday 17 January at 7pm Stoke Cult Film Club will be showing Bruce Lee's ‘Enter the Dragon’ on our big screen, directed by Robert Clouse and starring Bruce Lee and John Saxon.
Mixing Kung Fu and Blaxploitation, it's the tale of a martial artist (Lee) who is recruited by a spy agency to infiltrate a tournament run by the head of an opium smuggling ring while also hunting the men responsible for his sister's death. This was Bruce Lee's last film, completed just before his death.
Enter the Dragon brought the Kung Fu movie genre to the mainstream American cinema. For the keen eyed see if you can spot Kung Fu legends Jackie Chan and Sammo Hung in early roles.
Doors open at 6pm and the film starts at 7pm with an extra-long interval and an invitation to use our wonderful bar and café.
Tickets are £5 each and can be obtained by phoning the museum on 01782232323
For further information on our exhibitions and events please click on this link