I gave her the gifts of the mind.
I gave her the secret sign
That's known to all the artists who have
Known true Gods of Sound and Time.
With word and tint I did not stint.

I gave her reams of poems to say
With her own dark hair
and her own name there
Like the clouds over fields of May.

From Raglan Road by Patrick Kavanagh


The first time I came across the name Tommy Dempsey was sometime in the late 1970s. My parents were great lovers of folk music and my father Geoff in particular was an avid collector of folk on LP, his tastes ranging from The Seekers to The Dubliners and The Corries to The Wolf Tones. One evening he had taken my mother, Joan, to see Tommy Dempsey with his group in a pub in Birmingham and returned with the treasured trophy of a signed album. On future occasions they took along my grandparents to see Tommy, who were Dubliners living on the Lee Bank housing estate opposite Davenport’s brewery and the Birmingham Accident Hospital. My mother’s younger brother Dennis Lawlor was also a fan of Dempsey.

Whilst our house on Station Road in Harborne was full of teenagers, blasting out everything from The Osmonds to Led Zeppelin from our respective record players and cassette recorders, we couldn’t help but absorb our parents’ passion for folk through auditory osmosis. It must have hit a chord, so to speak, because at the age of 16 I was listening keenly to Bob Dylan alongside The Clash, The Jam and The Stranglers, drawn in by the political and social messages of Dylan’s early songs. Listening to Dylan, Cat Stevens, Neil Young, Joni Mitchel, Van Morrison and Joan Baez inevitably led me on a deeper journey – making the connections between contemporary acoustic music and the generations who had gone before, Johnny Cash, Woody Guthrie, John Lee Hooker, Pete Seeger, Huddie  Leadbetter…

The late 1970s had seen the flourishing of Irish folk music across Britain, a passion perhaps emerging from the tens of thousands of Irish families who had settled in English cities since at least the late 50s. People like my grandparents who had eloped from Dublin earlier, in 1938, and raised their family in Small Heath, Ladywood and finally Lee Bank. Whilst the Irish community in Birmingham had kept their heads down in the wake of the IRA pub bombings of 1974, it did not stop them celebrating their culture whenever they could and music was perhaps the best way of doing this. Music became the medium through which the people of the Gaelic diaspora expressed their memories of home, their folk lore and their cultural traditions.

But Irish music also appealed to a wider audience of English, Scots, Welsh and every other race who found themselves living in Britain’s towns and cities, drinking in its hostelries and watching it’s Saturday evening staple of variety-entertainment television, in which personalities of Irish inheritance seemed to feature highly. Whether they were singing songs, telling jokes or hosting the shows, celebrities of Irish descent were everywhere: Val Doonican, Frank Carson, Cilla Black, Dave Allen, Spike Milligan, Eamonn Andrews, the Nolans, Terry Wogan …Lennon and McCartney!

Into this rich entertainment mix started to appear the Irish folk music groups. The Clancy Brothers formed in 1956 were perhaps the pioneers of Irish music both in America and Europe; from 1962 The Chieftains established themselves among the most musically accomplished of Irish bands and around the same time came The Irish Rovers, The Wolfe Tones and of course The Dubliners, each announcing their arrival with characteristic Irish wit, poignancy and in some cases a brazen nationalist edge. In fairness the patriotic song of insurgency was not the sole raison d'être of Irish groups by a long chalk - songs about lakes, mountains, drunken nights and cherished lovers forming the core content which proved to have the widest appeal.

Later came The Fureys & Davy Arthur, Planxty (with Christy Moore), The Bothy Band, De Dannan and Clannad – all of them selling records by the million and filling concert halls with old and new fans. We should not forget the influence of more middle-of-the road yet hugely popular artists like Foster & Allen, Brendan Shine and Liverpool band The Spinners in popularising the wider genre of acoustic story-based music with an Irish lilt.

It was during the era when The Clancy Brothers and Tommy Makem, clad in their trademark Aran jumpers were popularising Irish folk music on both sides of the Atlantic Ocean, that Britain was also enjoying a revitalisation of its own traditional folk music. Ewan MacColl, a Salford born socialist had teamed up with American folk singer Peggy Seeger (half-sister of Pete Seeger) to front the British folk revival. MacColl made over a hundred albums as well as co-producing with Charles Parker the famous Radio Ballads at the BBC’s Birmingham studios.

Other great names in British folk music in the 1950s and 60s included The Copper Family, The Watersons, Shirley Collins, A.L Lloyd, Davy Graham, Martin Carthy (who influenced Dylan and Paul Simon), John Renbourn, Ralph McTell and Bert Jansch. In Birmingham the folk scene was driven by the Ian Campbell Folk Group who could draw large audiences to their concerts at venues as large as the Royal Albert Hall as well as playing their more regular gigs in the intimate surroundings of Birmingham’s city centre public houses. Artists who either played in the band or got up and performed with them included Dave Swarbrick, Dave Pegg, Spencer Davis and Bearwood-born Christine Perfect (later of Stourbridge blues band Chicken Shack and the great Fleetwood Mac).

One of the pioneers of folk music in Birmingham alongside Ian Campbell and several years before its hey-day in the early 60s, was a slight young Irishman with a mop of curls and a full beard which pre-empted the beatniks of the late 50s, named Tommy Dempsey.

Tommy Dempsey arrived in Birmingham city in 1953, meeting Ian Campbell outside a Birmingham concert venue in 1956 as Campbell was handing out flyers to promote his first group, The Clarion Skiffle Group. 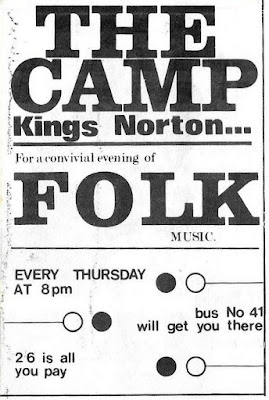 In the late 1970s I saw Tommy playing in person, firstly in the basement of an Irish pub near Dudley Road Hospital (nowadays City Hospital) where I was training as a student nurse and a few months later at the Anchorage Social Club at All Saints Hospital in the foreboding shadow of the rear wall of Winson Green Prison. During this period my favourite bands were the Two Tone ska bands like The Specials and The Beat and reggae bands such as Steel Pulse from Handsworth and the aforementioned UB40, all local talent from the West Midlands. Tommy Dempsey’s music was clearly a different genre to the reggae and ska I was drawn to as a young person, though there was a comparable raw edge and an energy which I felt compelled to seek out, especially in the environment of an authentic inner-city, working class public house – no plastic shamrocks, leprechaun hats or fake-emerald encrusted kitsch in these places – bump shoulders with the wrong person in one of these pubs and expect a pasting on the pavement outside St Patrick’s church shortly afterwards!

I am reminded here of when The Dubliners teamed up with The Pogues to record and perform The Irish Rover. In Irish folk music there is no such thing as older musicians standing aside for the youngsters. An older musician can deliver the same song with the same freshness and originality as their  youthful counterpart. Indeed the experience of age often adds that authenticity of delivery and the ol’ twinkle in the eye. Music belongs to all generations equally and is best when mixed and shaken well, which is what Tommy always endeavoured to do.

65 years after first performing in the back street clubs and boozers of ‘dirty old Brummagem’, Tommy is still entertaining audiences with his rich brand of balladry and traditional tunes.